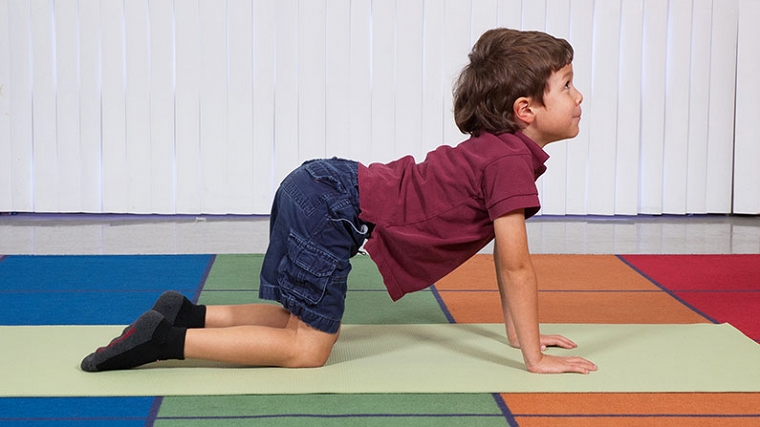 Yoga is growing in popularity in the U.S. as a complementary therapy for children with special needs and autism, with rising numbers of schools and parents participating in innovative programs which are cropping up around the country. Scott Anderson, teacher and founder of YogAutism, mentions on his site that in addition to benefits typically associated with yoga—improved strength and flexibility, and an increasing sense of peace—autistic children also experience a reduction of pain, anxiety, aggression, obsessive behaviors, and self-stimulatory activities. And there’s more good news. The children are also having greater success making new friends and regulating emotions. 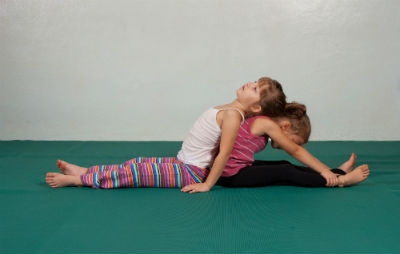 Yoga is growing in popularity in the U.S. as a complementary therapy for children with special needs and autism.

Louise Goldberg, author of Yoga Therapy for Children with Autism and Special Needs, also has first-hand experience witnessing the enormous benefits children on the autistic spectrum experience from practicing yoga. In 1981, Goldberg and a colleague were invited to teach a demo class for teachers at a residential hospital for children with severe emotional and behavioral disorders. “We were both fairly new yoga teachers and we just made it up as we went along. But seeing the kids—many of whom were extremely anxious, withdrawn, or angry—let go, for even a moment, was a revelation. We were amazed at how effective yoga was with these children and how much they enjoyed it,” says Goldberg.

Children with autism have very different sensory experiences from other people, and these responses often cause their bodies to get stuck in fight, flight, or freeze modes that divert blood from the digestive organs to the skeletal muscles. This activity results in disrupted digestion, increased heart rate, and shallower breathing—all of which readily provoke anxiety.

Practicing his floating on a cloud (shavasana), he was able to self-regulate and calm his emotions,” explains Goldberg.

“I had a student, a little boy who got very, very anxious if the school bus was late. His mother drove him to school everyday and one day she saw him lying down in the back seat of the car, and she asked him, ‘Are you sick?’ He responded, ‘No, I am relaxing.’ The mother said she had never seen him so calm. Practicing his floating on a cloud (shavasana), he was able to self-regulate and calm his emotions,” explains Goldberg.

The Importance of Visualization

Autism educators often highlight the importance of visualization practices, so Goldberg designed the program Stop and Relax, which uses over 50 cue cards to help children visualize the pose they are supposed to take. Through this visualization, they are able to successfully imitate and model physical actions and postures they would not have been able to previously. 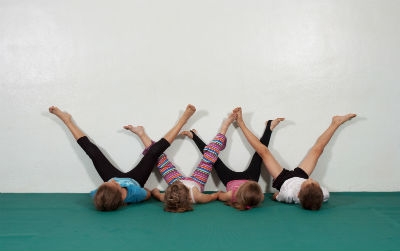 “Some of the kids don’t speak—don’t have language—but they can look at a visual cue card and respond. Some children also have trouble engaging, even if they can achieve fluid sentences and can perform motor planning. However, they don’t have the kind of motor planning skills like going from point A to point B to point C. But on seeing the visual cue, somehow it triggers something in their brain and they can replicate it,” she explains.

Resistance to the Word “Yoga”

When Goldberg started teaching her specialized yoga classes, she received some resistance from parents and schools, as some people didn’t feel comfortable with the word “yoga.”

“I think some people around the U.S. were a little bit narrow-minded. Some even thought it was a cult,” she explained. “One thing that I want to impart here is that yoga, as it’s practiced in public schools, is not a religious practice. The postures and breathing exercises, the relaxation techniques and self-regulation tools, can be culled from yoga’s vast well of resources to be implemented in a public school curriculum.”

This program is applicable to all children and ages, as it is just another form of movement involving exercise, mindfulness, and breathing.

Goldberg now uses the name “Creative Relaxation,” and takes yoga poses and applies them to challenges that children have in either their school or everyday lives. This program is applicable to all children and ages, as it is just another form of movement involving exercise, mindfulness, and breathing.

“The idea is that when we are in a school, we don’t use any Sanskrit names. We don’t call it the prayer pose. We call it the tree pose. Viparita shalabhasana is our Superman pose. I don’t want anyone to feel that it is religious. We don’t do any chanting. When we sing, it’s just generic songs.”

Goldberg believes that all children would benefit from yoga practice in school classes. “Ten years ago, when I was teaching in a school, I had a chance to go into all the classes which had a child with autism and I taught the whole group. It wasn’t just the one child that benefited from this. Everyone did,” she explains with a smile.

Dr. Judy Willis, who has combined her 15 years as an adult and child neurologist with her teacher education training and years of classroom experience, explains in her book, How Children Learn Best, that children need breaks every 15 minutes. If that time is exceeded, no learning takes place, which leads to frustration for the children and the teacher.

Goldberg agrees and believes that yoga provides the perfect antidote. Just holding a pose for a minute, while sitting down or standing next to the desk, and learning can continue without teachers having to discipline the children for the rest of the lesson.

In 2012, researchers who investigated another yoga program in the study, “Efficacy of the ‘Get Ready to Learn’ Yoga Program Among Children with Autism Spectrum Disorders,” (published in the American Journal of Occupational Therapy) found that “use of daily classroom-wide yoga interventions have a significant impact on key classroom behaviors among children with ASD.”

The study, which lasted 16 weeks, divided children into two groups. The first group participated in the morning classroom yoga program, and the second group participated in a standard morning classroom routine. Challenging behaviors were assessed with the standardized measurements of the Aberrant Behavior Checklist and behavior coding both before and after the study period. 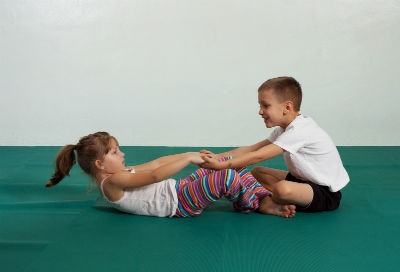 Researchers concluded that the Get Ready to Learn program “reduces irritability, lethargy, social withdrawal, hyperactivity, and noncompliance in children with autism spectrum disorders (ASDs),” and that incorporating the program into the school day “can maximize academic engagement and optimize classroom time.”

It is unclear how many children are currently participating in similar programs, but Goldberg states that there are hundreds of teachers who teach thousands of children in the U.S. She likes to refer to the movement as “a snowball effect” that benefits more and more students—and their teachers and parents—over time.

“I think that one of the ways to change a culture is to start with the children. In the U.S., we have a terrible problem with bullying…. Mindfulness activities that incorporate breath, like yoga, are perfect ways to create a community which is more compassionate, less competitive, and more self-aware,” says Goldberg.

Photos courtesy of edzeissimages.com. Reprinted with permission of WW Norton.

HANNAH BRANDSTAETTER
Hannah is a freelance journalist and yoga enthusiast who grew up in Vienna. She currently lives in London after spending 5 years in Los Angeles where she became more involved in yoga and meditation. She has been practicing yoga since she was 16 and particularly enjoys Brikram and Hot Vinyasa. 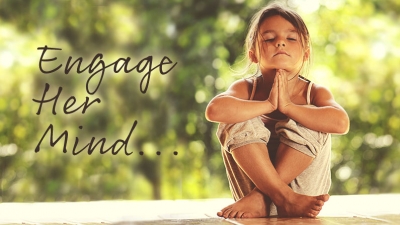 When I read this article I immediately knew I wanted to share it with my readers.  Let me know your thoughts and comments.  Stay Healthy and Be Well!

Over my Christmas vacation I restarted practicing yoga and my kids have been joining me.  How fun!!  This has been a wonderful experience for us.  I have been feeling calmer and more focused.  The girls have been enjoying themselves also.  Even my husband said he may want to start taking it up.  Santa brought my oldest a yoga mat so we are side by side.  I knew she had an interest in it.  And we all know it is always more fun to do things with a partner in crime.

I haven’t really done yoga consistently since I was in college (which was a really, really long time ago).  My husband also got me a fitbit for Christmas which I have to say is pretty damn awesome.  And its in my favorite color!  It keeps track of my steps, heart rate, miles walked, calories burnt, and it tracks my exercise which includes yoga.

Over this upcoming year, I am also going to attempt to implement some of these practices in my treatment regimens.  As many of my patients can already attest, I only prescribe meds when I deem necessary.  I always try to encourage diet change and exercise first.  I spend an extensive amount of time trying to understand the stressors that may be leading to the symptoms that my patients are feeling.

Yoga has been studied in the treatment of IBS to aid in symptom relief if done on a regular basis.  Also in the autistic population, children with anxiety, and children with functional abdominal pain can benefit from yoga as well.  I will be learning more about these various yoga poses, techniques and methods so that I can share them with you over the next weeks to months.

I hope that this new year will be one of Education, Enrichment, and Enlightenment!  Stay Healthy and Be Well!!

As always I look forward to hearing your thoughts and reading your comments.

Find Posts that Interest you by Topic